“Tum gareeb ho, tum rehne do. Waise bhi tum jhoota case likha rahi ho toh case nahi likha jayega” (You are poor, so you shouldn’t pursue this case. Since this is a false case, we will not register it)- a 30 year old woman from the Scheduled Caste was told when she went to report her rape in a police station in Lucknow, Uttar Pradesh in  June 2019. She returned a few days later, to file a First Information Report (FIR) only to be told by the Station House Officer (SHO) that he had misplaced her original statement. The police personnel repeatedly pressured her to withdraw her complaint.

After she persisted, her FIR was lodged by the police two days later.

Survivors of rape and other forms of sexual violence face many barriers in accessing justice in Uttar Pradesh according to a new report  ‘Barriers in Accessing Justice’ by the Centre for Human Rights Initiatives (CHRI) in collaboration with the Association for Advocacy Legal Initiatives (AALI). The report documents the experiences of survivors from seven districts of UP- Aligarh, Amroha, Auraiya, Lucknow, Jhansi, Jaunpur and Muzaffarnagar- between 2016-2020 while reporting rape and  subsequent difficulties in accessing legal remedies.

Crimes against women in UP have increased by 55% between  2014-2019 according to the  latest data from National Crime Bureau Report’s (NCRB). A large part of this is due to a 74.8% increase in cases booked under cruelty by husband or relatives under 498A of IPC. However,  there is a significant fall in the number of cases booked under rape (Section 376 of IPC) or molestation (Section 354 of IPC), despite media reporting on violence against women in the state. The study from CHRI and AALI offers some important perspective and survivors’ accounts which help explain the data on crimes of rape registered.

It takes anywhere between 2 to 228 days to register an FIR for a sexual assault by survivors found the CHRI report. None of the survivors documented in the report were able to get an FIR registered when they first approached the police station. In 42% of the cases, the police registered an FIR only after the matter was escalated to the Senior Superintendent of Police (SSP) /Superintendent of Police (SP).

In some instances, the Station House Officer (SHO) and other senior police personnel told the survivor that the FIR would be registered only after a ‘preliminary enquiry’ into the incident.

In five cases, the police registered the FIR only after the Chief Judicial Magistrate passed an order after the survivor approached the court. In one instance, an FIR was registered with sexual harassment and not rape, as the main offence, which undermined the nature of sexual violence.

These instances reveal that investigations into cases of sexual violence are not initatied because police are unwilling to formally acknowledge them as such, making it difficult for women who come forward to report. This delay in registration, in turn, could lead to a tampering or dilution of evidence, and loss of survivor’s original testimonies.

“The act of sexual violence itself stems from power differentials between the survivor and the perpetrator”, states the report.  “The refusal of the police to register such cases offers reaffirmation to the power held by the perpetrator over the survivor, by the very system meant for the protection of women survivors”, it adds.

Much of this delay in registering sexual violence complaints is due to the pressure to display reduced crime within their jurisdiction according to casewokers who worked with the survivors.

“I feel that police don’t want the crime numbers to go up, that’s why they don’t register the rape cases”, said one caseworker from Amroha.

Cases registered against rape in Uttar Pradesh saw a 11.6% decrease between 2014 and 2019 according to data from the National Crime Records Bureau. While police officials claim that this is simply a result of lower crime rates and stricter law enforcement, experiences of survivors tell a different story. Intimidation by police officials, discrediting survivor’s narratives, fear of caste and religious persecution and a general lack of sensitivity in handling cases of sexual assault discourages women from reporting rape.

A domestic worker from Aligarh described the humiliation she faced at the police station when she went to register her FIR for rape.

“The police said that I wasn’t even beautiful enough for someone to trouble me; I wasn’t even young, why will anyone sexually assault me?”

A report titled “Non-Registration of Crimes- Problems and Solutions” published by the  Bureau of Police Research and Development (BPRD), three years after the Supreme Court passed 166 A(c) outlined the grave harm to justice due to this procedural lapse. Section 166A(c) mandates criminal prosecution against any police officer for failure to register a FIR of a complaint of a specific list of offences including rape and gang rape.

“Overall, non-registration of crimes severely obstructs access to justice to the poor and people belonging to the marginalized and vulnerable sections. Overall, it erodes the efficacy and

effectiveness of the police system and severely erodes the spirit of the rule of law”, the report stated.

Most women who report rape are aware of the legal provisions under Section 154, CrPC which mandates that all complaints of sexual assault be recorded by women police officials alone. The CHRI report noted that 85% of them had to discuss details of their assault with male police officers. This made them both hesitant to share and forced them to leave out key details of the case.

“Women constables usually are there to take the survivor for medical and for S. 161 CrPC statements. All the work is done by a male Sub-Inspector, women personnel only assist. They are often not even actively involved in the case”, observed a  case worker from Amroha.

Meera Jatav, an independent journalist and founder of Chitrakoot Collective in Bundelkhand region of UP, who has been reporting on gender based violence for the last 25 years sees this as a routine pattern in the state.

“Male police officers tend to focus on the events before and after the rape instead of the facts of the case. However, even women police officers partake in victim blaming. There is a sense of tokenism attached to their job.”

Most survivors were also unaware of the legal implications of police failure in filing FIRs.

“Survivors say they do not want to take any risk with the police especially when their case is going on”, said another caseworker from Jhansi. “ It is also because of fear, survivors don’t complain as they think they might be put into trouble by the police or their family members may be framed in a false case”, she said.

The delay in police action, in some instances, resulted in survivors being raped again. In other cases, police have suggested marriage between the survivor and the accused with the help of village Panchayats to ‘solve’ the issue among themselves. All this has resulted in severe mental trauma for the survivors.

“I am still not able to sleep properly, even my legs shake. At times I am up the whole night. I am running on medicines and that’s how I am alive”, said a survivor from Lucknow describing her trauma.

Caste and Gender Discrimination Of Women From Marginalised Groups

“My FIR couldn’t get registered because they are from the dominant caste. The police officers at the police station and SP rank were of the same caste as that of the alleged accused”, recalled a survivor from the Dalit community in Jaunpur.

Women from marginalised castes continue to face the already  prevailing systemic oppression. As upper caste solidarities are forged between police authorities and the accused, survivors from ‘lower’ castes are termed as opportunistic and even called  extortionists.

“The police actively discourage Dalit and Adivasi women from pursuing their case and accuse them of alleging violence to earn money as compensation”, says Meera Jatav on the caste nexus between the police and the accused.

In the recent gang rape of a 19 year old Dalit girl in Hathras by upper caste Thakur men, media reports suggest that the police initially dismissed the claims of the victim and asked her family to take her away.

Sexual violence Is A Rights Issue

“Rape in India is still thought of to be an issue of ‘honour’. The protectionist approach that law enforcement agencies takes in response to sexual violence is therefore an attempt to restore this lost sense of ‘honor’, instead of viewing it as a violation of the survivor’s rights as a citizen”, said Priyadarshini, a program officer at AALI’s Resource Center and Advocacy Program, in an interview to BehanBox.

The report makes several recommendations to the ministries of Women and Child Development, Home Affairs and the National Human Rights Commission, to create  a ‘survivor centric and trauma informed model’ that enforces accountability of the law and its bearers. It calls for  a state wise audit of cases brought against police officers under Section 166 A (c ) as well as  making timely  registration of FIRs as a key metric to measure police service and performance.

Vrinda Grover, an advocate in the Supreme Court of India, while speaking in a panel that discussed the findings of the report considers it a positive development that women are recognising  sexual violence as an act of injustice and were willing to engage with the criminal justice system.

“The study shows that there is a penal liability being attached to women entering the criminal justice system”, said  Shubhangi, a human rights lawyer with AALI.

“ Justice needs to be ‘experienced’, not just ‘done’”, she says.

When Violence Is the Cost Of Doing Politics

When Mamta (26), was elected to Jayadara  Gram Panchayat ( lowest tier in India’s 3… 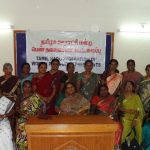