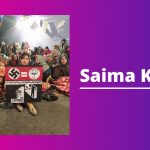 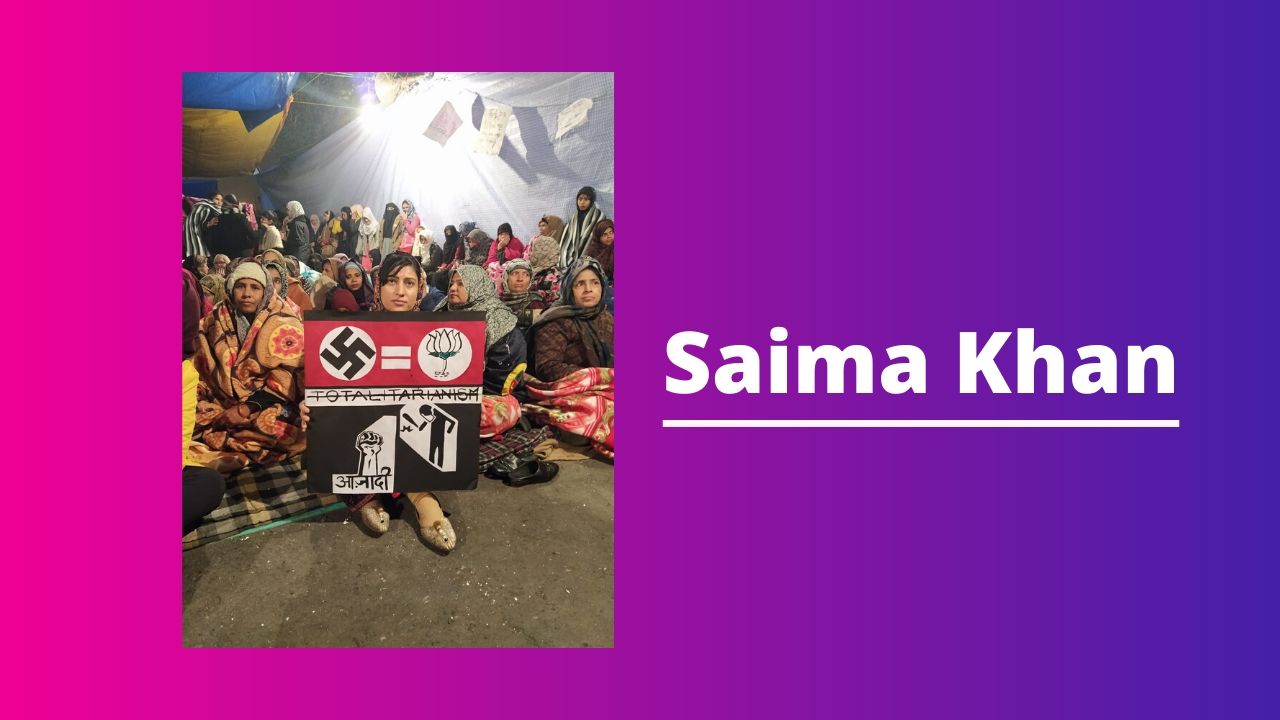 Saima Khan(33) a resident of Jasola at the anti CAA and NRC resistance in Shaheen Bagh. Protestors at Shaheen Bagh, led by women, have been offering a peaceful resistance against India’s discriminatory citizenship laws for the past 19 days.

Saima Khan (33) is heartbroken and angry.

“ I cannot explain in words my pain when I am asked as a Muslim to prove my citizenship in my own country”, she told BehanBox.

Saima is a resident of Jasola Vihar near Shaheen Bagh,a neighbourhood in the southern part of  India’s capital New Delhi. Shaheen Bagh is the site of a mass sit-in resistance, primarily led by Muslim women of the area to protest against India’s new citizenship laws.

The Government of India has legislated the Citizenship Amendment Act, 2019 which gives citizenship to persecuted minorities from neighbouring countries excluding Muslims. Additionally, it has announced the implementation of a National Register of Citizens, which demands documents of ancestry for future citizenship. Together these two instruments,as political scientist Professor Niraja Gopal Jayal explains, will lead to radical transformation and exclusion to  India’s idea of citizenship.

Shaheen Bagh has become an epitome of peaceful, community resistance in the face of brutal violence of the state. Entirely leaderless, the resistance is a model of shared resources and solidarity that drives both the momentum and mechanics of the movement.

At the forefront of this movement are the Muslim women of Shaheen Bagh. For the past 19 days, Muslim women of all ages and classes have been sitting in here with a singular routine and purpose.

In a long chat with BehanBox, Saima talks of her anxieties, heartbreak, anger  as a Muslim woman and her resolve to fight for her rights as a citizen of India.

This Is A Fight For Our Country and the Constitution

Yeh Samvidhan bachane ki Ladayi hai ( This is a fight to save our constitution). For the last 19 days, we have been sitting in the biting cold under the open skies to to save the soul of India.

If the Prime Minister has no respect for the Constitution, we say , he has no right to be in office.

Our Constitution guarantees equal rights for all citizens irrespective of religion. Yet, this Government brings about the Citizenship Amendment Act and declares they will implement the National Register of Citizens (NRC) to exclude just one community- the Muslims of this country.

Their agenda is very clear. Long ago, the BJP had declared that they will make India a Hindu Rashtra. We are equal citizens of this country. We will not let that happen.

First they pass discriminatory laws. Then, they attack innocent students studying in the library in Jamia University. They do not spare the women in their hostels and washrooms. In Uttar Pradesh, Yogi Adityanath’s Government is on a killing spree, attacking women and children. What does all this tell you? They want us (Muslims) to leave the country.

Yeh zulm nahin toh kya hai? ( What is this if not injustice?)

We Have Been Silent Against Injustice For Too Long

Yeh sarkaar kai baar zulm kar chuki hai aur hum khamosh rahe. Yeh hamari bhool thi. ( This Government has repressed us for too long and we remained silent This was our mistake)

We should have raised our voices strongly during Demonetisation. We should have spoken when they locked down Kashmir. We were silent after the Babri Masjid judgement, mainly because we did not want to fight over a mosque. We wanted peace. But we did not know they will go to this extent to make plans to drive us out of our own country.

Kuch logon ne is desh ko ghulam kar liya hai. Ab humein azaad karwana hai [Some people have enslaved this country. We have to fight for our freedom].

If We Have To Die, We Will Do So In Our Own Country

As a mother, I am very scared. I can clearly see that we are going to jail. And a very bad jail called Detention Center.We feel it is better to die here in this cold than go to the hellish detention centers. We have seen pictures of the detention centers. Activist Harsh Mander who recently visited a detention center in Assam told us about the conditions. We cannot begin to imagine our life and our children’s life in these centers.

My child is very unwell but I still come here leaving her alone at home. This is our moment to fight for their future. Once that is secure, we can rest.

Even the kids are scared. This is why they come out for these protests too.

Equally, we are not afraid anymore. Yesterday three busloads of police came to Shaheen Bagh. We were amazed at how unafraid we were.

Agar marna hai toh hum apne watan mein marenge [ If we have to die, we will do so in our own country].

If we are not welcome in our own country, where do we go?

Main apna dard bayaan nahin kar sakti jab hamein apne watan mein paraya kehte hain ( I cannot tell you how much my heart aches when they say we are alien in our own country).

Agar hum apne desh mein paraye ho gaye, toh paraye desh mein hum kya honge? ( If we are foreigners in our own country, then what will we be in a foriegn country?)

For the last 19 days, I leave home around midday and cross four checkpoints to reach the protest site at Shaheen Bagh. Everytime I leave home, I do not know if I will be back. This is true of all women who come to Shaheen bagh.

Yesterday, I got back home early at 3 AM. I offered Namaaz and lay on the bed. But none of us can sleep well these days. Women have hardly been able to pay attention to their households since this movement started. I have 4 kids myself and I have not even checked on them properly. My heart is heavy with guilt but we have no choice but to do this.

We would not have had to do this If the opposition had spoken up strongly.Right now, I do not trust anyone but ourselves.

I have been to all protests since this movement began. To Jamia, to the police headquarters the day the students were attacked.

Who has a Proper Document In This Country?

The Government says we need to produce documents to prove our citizenship. Who, in this country, has every proper document? We have seen how our names are different on our birth certificates, Aadhar cards, Voter ID cards. If they cannot even get our names right on our certificates, how are they going to use this to determine our citizenship?

It is not just Muslims, but the entire poor of this country-the Adivasis, migrant tribes, those without lands-  who will suffer in this process of organising documents. There will be huge lines to procure documents. People will have to leave their jobs and daily wages for this. They will have to pay middlemen to get certificates. In Hapur, not far from Delhi, I have heard that people are already queuing up to get their birth certificates.

We witnessed how the poor and the working class suffered the most while standing in the queues during Demonetisation.

When this is such a tedious process, why is the Government investing so much money in this? Especially, when there is a need to improve other things in this country, like education and economy.

It has been 19 days but our Prime Minister has not uttered a word that can calm our anxieties. At Ramlila Maidan, we expected him to do so but instead every time he opened his mouth there were lies and more lies. He said it is a rumour that they are implementing the NRC. If it is a rumour then why doesn’t the government  say so categorically? Why doesn’t it say in public places?

Then they said National Population register (NPR) has been happening for a long while. But in previous NPR surveys we did not have to show documents. Now we have to. It is the Government that is spreading lies and creating confusion.

Then he said there were no detention centers. We googled it and saw the ones being built in Assam.

Modi says we do not understand NRC and CAA. “ Samajh aaya hai tabhi hum wahan khade hain.” ( We understand it well and that is why we are here). And if they think we don’t understand it, he could have used the Ramlila Grounds speech to explain it to us. Why didn’t he?

He thinks we are not intelligent enough. Has he forgotten that the movement against the NRC originated in universities like Jamia- a place of highly qualified people?

If My Voter Card Is Invalid, Then This Government Is Invalid Too

Before asking us for our documents, I challenge the 545 elected MPs in the Parliament to show theirs. Let Modi show his degree.

They lost the Rafaele papers from 3 years ago but they want us to produce documents from the 1970s.

I have never seen my own grandfather, how am I supposed to get his documents?

Everyone Is Looked After At Shaheen Bagh. Even The Police

This is entirely a volunteer led protest. People of Shaheen Bagh joined in organically because we felt our very existence is under threat in this country. No one is planning anything. I think God is running the show.

Everyone is contributing in their own way. We arrange for food, water, tea here. Male volunteers have left their jobs to ringfence the sisters of Shaheen Bagh for our safety. We have created two borders- one each on Delhi and Noida ends- and volunteers look out for troublemakers and miscreants who can disturb the peaceful protest. One bad incident and it gives a chance for the police and administration to crackdown on us.

Having said that, police personnel here are cooperating with us too. The other day I saw that they stopped 2 people who had got down from a car with a BJP flag from entering the protest site.

They stand along with us in this cold. We also serve them tea and food.

This is what resistance must have looked like during the Freedom Struggle.

We have tremendous pressure from the police and administration to wind up our protests. We also know that it is an inconvenience for commuters and businesses are losing money because everything along this stretch is shut down for 19 days now. But what choice do we have?

Everyone in Shaheen Bagh agrees on this one thing. Roll back NRC and NPR or we will die here.

‘Ab hum wapas nahin ho sakte. Peeth pe goliyan nahin khayenge saamne se khayenge’ ( We cannot go back now. If we have to face the bullets, let it be on our chests)

This is our history in this country where our ancestors fought hard for our freedoms. 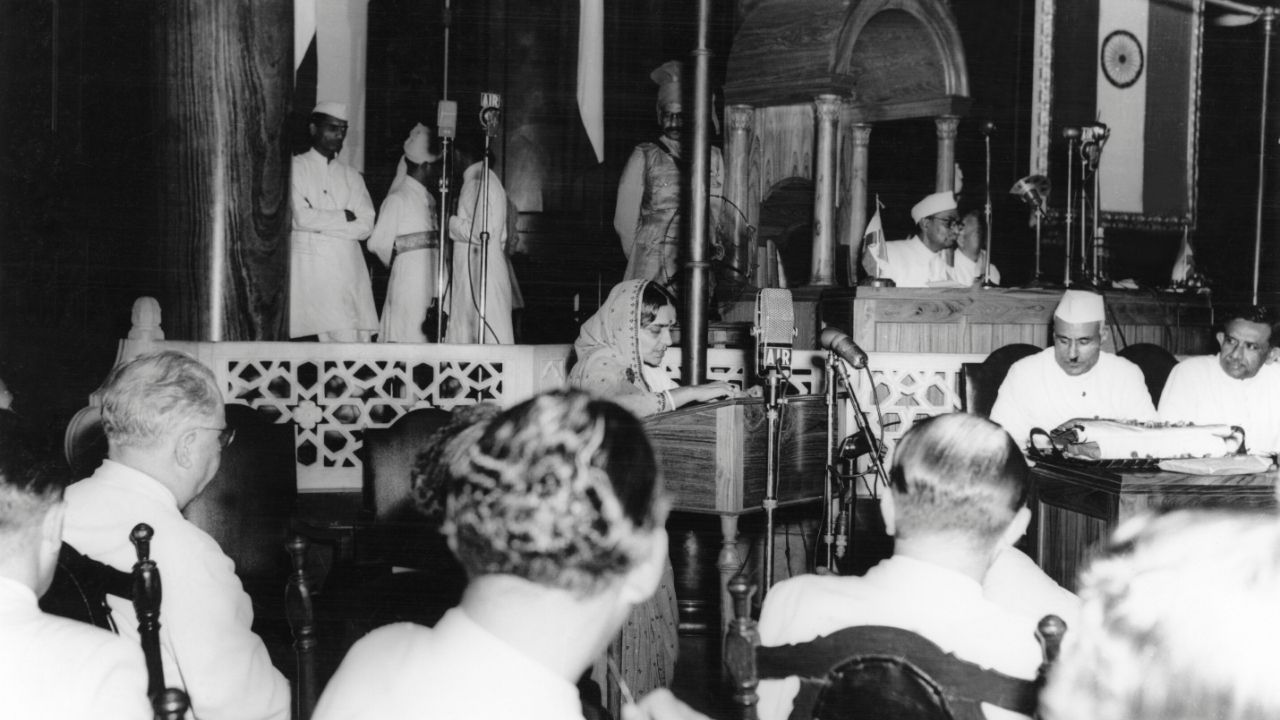 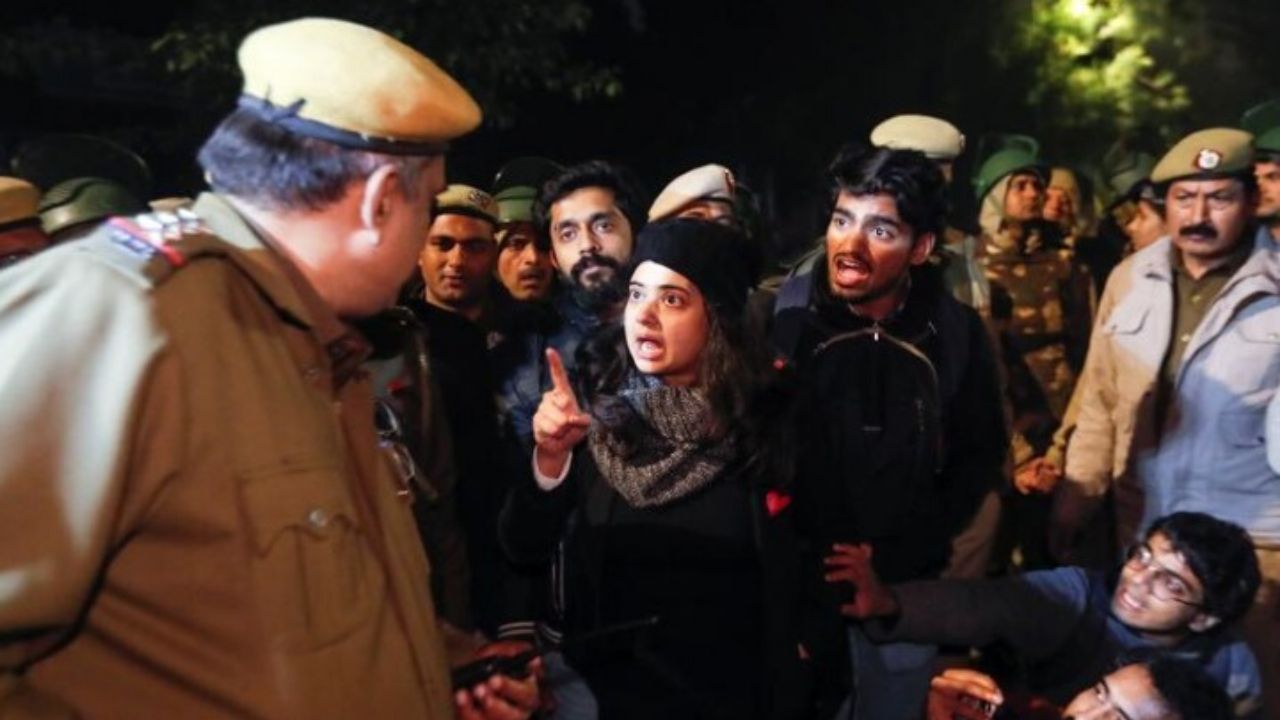 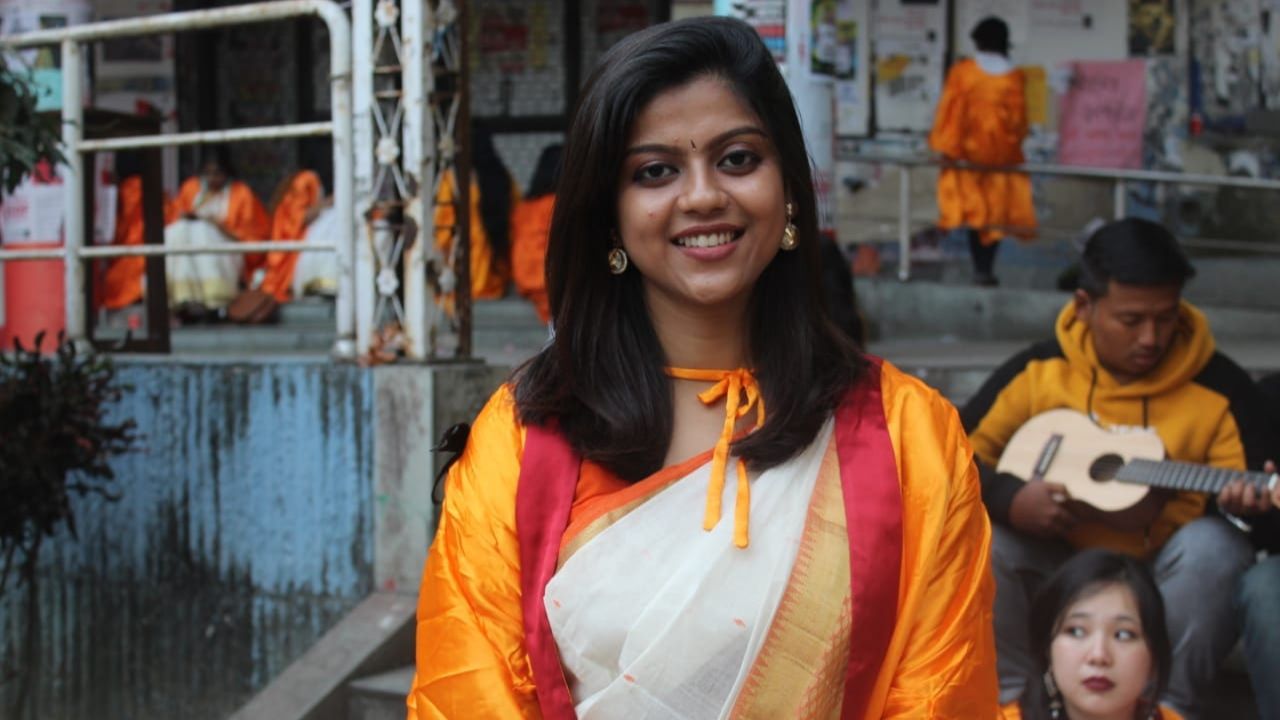 Debsmita Chaudhury (24), is a gold medallist in Political Science and International relations from Jadavpur University. She expressed her dissent during the convocation ceremony by tearing a copy of the Citizenship Amendment Act. (Photo Courtesy: Debsmita Chaudhury)

This Government has brought politically inactive students like me on the streets with its anti-people policies: Debsmita Chaudhury