Goddeti Madhavi (26), the first time Member of Parliament (MP) from Araku in the southern state of Andhra Pradesh (AP) knows the trust that her constituents have placed in her in this predominantly tribal constituency. After all, more than half the voters (52%) of Araku had chosen her, a political novice, to represent them over V Kishore Chandra Deo– a five time MP and a former Union minister in the recently concluded elections to the Lok Sabha, the directly elected lower house of the Parliament, in May 2019.

She is determined to fulfill their aspirations in her five year term.

“Each time I enter the Lok Sabha, I am not just a lone MP. I carry the voices of over 1 million people of Araku with me ”, the young Scheduled Tribe MP of the Yuvajana Sramika Rythu Congress Party (YSRCP) told BehanBox on the evening before her oath taking ceremony on a June evening.

Araku, the only constituency reserved for Scheduled Tribes in AP, is an expansive region comprising of the tribal majority areas of 4 districts-East Godavari, Srikakulam, Visakhapatnam and Vizianagaram- in Northern AP. Known as “Agency” area with reserve forests along India’s Eastern Ghats, the region is rich in bauxite deposits with 90% of the state’s reserves concentrated here. Yet it has some of the poorest social development indicators.

71% of women and children in the constituency are anaemic. 80% of women in Araku valley have sickle cell anaemia, according to the National Commission on Scheduled Tribes. 32% children under the age of 5 in Araku constituency are stunted. Only 35.5% women have 10 or more years of schooling according to data compiled by Fact Checker India. Parts of the constituency have been chosen for the  NITI Ayaog’s Aspirational Districts program- a focussed intervention of the government of India to reduce disparities within districts. Additionally, the region has seen violent conflict between the Maoists and the state.

Bauxite mining poses a threat to the rich ecology and livelihoods of the Adivasis (Scheduled Tribes) of the region- mostly small farmers who own less than 1 hectare of land and those that depend on forest produce, who stand to lose their lands and turn into daily wage labour. Over the last 20 years, Adivasis in the region have been waging a relentless struggle against bauxite mining.

Madhavi, who has been a witness to these struggles and exclusions of the Adivasi population of Araku since her childhood, underscored this development paradox in her maiden Lok Sabha speech. She said:

“I represent Araku which is a reserved constituency. We have huge reserves of mineral wealth which have been exploited for so many years. As a result, the lives of the poor tribal people have not improved considerably and the forests being the main source of their livelihood, are being lost at a rapid rate.”

“ I grew up surrounded by politics since I was a little girl. I saw the Adivasis deprived of basic needs like education and healthcare. They would come to my father who was an MLA with their grievances to solve their issues”, she told BehanBox.

Madhavi’s father, the late Goddetti Demudu was a well respected leader for tribal rights and the  president of the Andhra Pradesh Girijan Samakhya- a tribal rights collective that fought against bauxite mining. Successive state governments had granted mining leases to private companies in  violation of the Supreme Court of India’s Samata Judgement that prevented private mining in  the Scheduled Areas. He was also a two time Member of the AP Legislative Assembly (MLA) from the Communist Party of India (CPI) from Chintapalli.

“ My father was my first teacher. I not only learnt my values and ethics from him but also the reasons why the adivasis of the region continued to face poverty and exclusion”, she said.

Her priorities in her new public role are shaped by these very issues. In her speech in the  Lok Sabha, she appealed to the Minister for Environment, Forests and Climate change Prakash Javdekar to evaluate the loss of livelihoods of the tribal communities before granting clearance to bauxite mining projects in the Araku.

Public healthcare, which continues to underserve the Adivasis in remote areas, is another of her major thrust areas. The average expenditure per hospitalisation in rural parts of Araku constituency is Rs.13,258, one of the highest in the state.

“ The cost of private healthcare is huge for the already poor Adivasis who have to travel to towns like Visakhapatnam, S.Kota, Srikakulam to get treatments. I will focus on upgrading the Community Health Centers (CHCs) to Public Health Centers (PHCs) and end the shortage of medical staff”, she told BehanBox.

Education for girls is an issue close to her heart.

“I had to go to a boarding school in Tuni ( a town in East Godavari district) for my studies because of the lack of proper education facilities here”, she said, speaking of her plans for Araku where only 35.5% women have 10 or more years of schooling.

Job opportunities for young people in the Agency areas is another concern. The Integrated Tribal Development Agency, the nodal agency in the region for development has withheld job notifications for the past 4 years. Madhavi herself had been waiting for the job notification to be announced before she got an offer to join active politics.

Beginning of a political Journey

Madhavi stepped into active politics only in 2018 after a personal request from YS Jagan Mohan Reddy, president of  the YSRCP. Jagan, as he is popularly known, had seen the enormous goodwill the people of Araku had for her father. As the chief minister of Andhra Pradesh, one of his first orders was to scrap the bauxite mining contracts as a response to the anti-mining struggle by the Adivasis of the region.

“When Jagan Sir asked me to join, I saw it as an opportunity to continue the work of my father in the region’, she told BehanBox. Until then, Madhavi, a former state level handball and basketball player, had worked as a physical education teacher on contract basis in a school.

“Around 1500 people from across the Araku region came with me to the party office, spending their own money, to show their support. It was overwhelming”, she said, her eyes brimming with tears.

Soon after, she was appointed the Parliamentary coordinator of YSRCP for the Araku Lok Sabha constituency- a big responsibility for a political novice, in part because of the enormous size of the constituency and the difficult forest terrain.

“At first, it was daunting. So, I joined the Padayatra with Jagan sir across the region where we walked for several kilometres everyday and listened to people. This helped me build my confidence and connect with people of the region”,she told us. In the run up to the AP state legislative assembly elections, Jagan undertook a walkathon across the 13 districts of AP.

Eventually, she was chosen to contest the Lok Sabha elections from Araku after YSRCP  had reserved the seat for a woman contestant.

March to the Parliament

In a contest of unequals, Madhavi found herself pitted against V Kishore Chandra Deo-the former Union Minister of Tribal and Panchayati Raj Affairs.

“ Some people said I was young and inexperienced and wondered if I stood a chance against a veteran MP. But I was confident because they were all my people. I grew up amidst them”, she said about her campaign strategy.

Perhaps, the most important achievement of Madhavi’s electoral campaign was her modest budget- an outlier in the most expensive elections ever in the history of India.

“I spent a total of 7 lakhs (0.7 million) rupees for my entire campaign. Except for my own transport and fuel costs, the rest was pooled resources from the people of my constituency. We would even eat and sleep in people’s homes as we campaigned”, she said.

Frugality is another value she inherited from her parents- Demudu and Chellayamma- both former government school teachers in Koyyuru mandal of Visakhapatnam district.

“ My father’s salary as an MLA was spent on the welfare of people and party activities. It was my mother’s salary that sustained our household and even paid for the construction of our house”, she told BehanBox.

The next five years: A period of learning and action

Madhavi sees her first stint in public office as an opportunity for learning while performing her public duties.

“It is just like going to school. I am both nervous and excited. I think first I need to learn Hindi to be able to work in Delhi”, she told us.

Apart from health and education, she has plans for ensuring fair prices for the Adivasi farmers growing paddy, turmeric, coffee and indigenous grains who are exploited by middlemen due to lack of access to information and markets.

“There are 4 Integrated Tribal Development Agencies (ITDA) in my constituency. As an MP, I will draw up a  proper plan and coordination mechanism between them to facilitate the adivasi farmers”, she told us while laying out the priorities for the region.

Madhavi has already made a mark as an MP. She has lobbied with the Minister for Jal Shakti (Water Resources) to bring Araku under the Comprehensive Drinking Water Project in the current financial year to solve the acute drinking water crisis in the region.

“I know the issues I plan to tackle are big ones. I hope I can make my father proud”, she smiled, as she remembered him on what was Father’s Day. 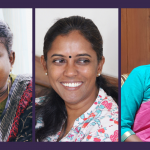 The Afghan MP Who Is Not Shaken By The Strong Winds

Fawzia Koofi (45), the Member of Parliament from Afghanistan, has survived several assassination attempts by…